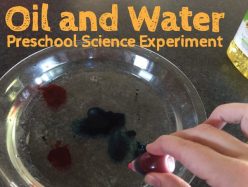 Experiment to find out if oil and water mix! Here is a step-by-step picture tutorial of how to complete the activity, including expanded questions to discuss with the children.

This activity works best with just a few children at a time so they may each help with the tasks and so they can better see the results.

Step 1: Pose the following question to the children, “Do oil and water mix? What do you think?” Both oil and water are often used when cooking. For those not familiar with oil, show them the container and explain that cooking oil is used in many food recipes. Add water to a pan. A clear baking dish works well because the children will be able to observe through the sides as well as from the top.

Step 2: Pour a small amount of oil in a paper cup. Use a pipette to soak up some oil and squeeze it directly over the water. (The oil can also be poured directly from the cup.) Do this in three or four spots. Ask children to describe what they see. Does the oil appear to float or sink? Can the children tell where the oil is? How? (Eventually, the oil will rise to the top of the water because it is not as dense.) 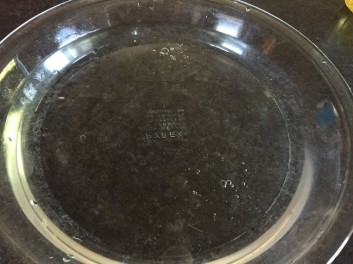 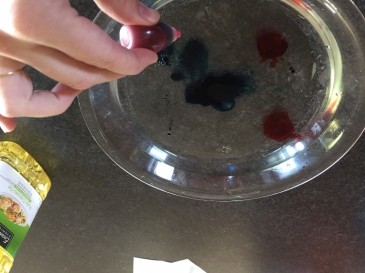 Step 4: Provide a drinking straw, and gently blow through it to make the food coloring, oil, and water move. Ask children to watch what happens. Does the color move and mix? Do the oil and water mix together? It appears that the color blends with the water, but not with the areas of oil. 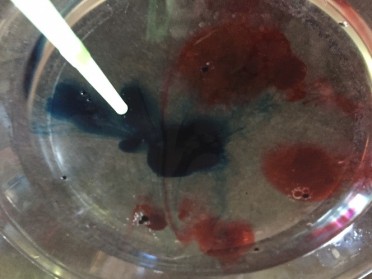 Step 5: Place a piece of paper on top of the oil/water mixture and let it lie there a moment. 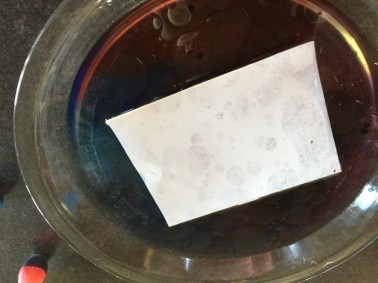 Step 6: Use tongs to lift the paper from the surface, and place it on a paper towel. Examine the paper together with the children. What do they see? Can they tell where the oil spots and water spots are? The oil and water did not mix together! What color are the water-filled areas? Did the two colors of food coloring mix together? What color are the oil-filled areas? Point out the dark food coloring spots that accumulated on the oil spots. Explain that food coloring contains water. Because oil and water do not mix, food coloring will not mix well into oil. Here is how my samples turned out—one with heavy yellow paper and one with white cardstock. 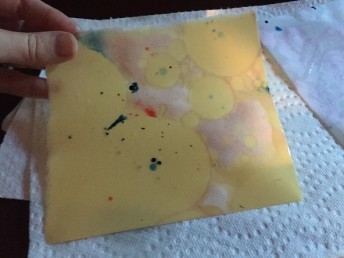 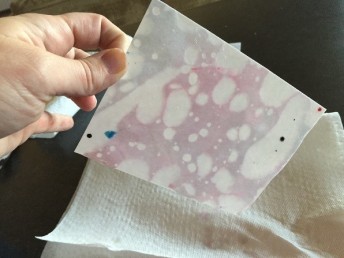 Here is a simplified version of a somewhat complicated answer:

Extension: Consider extending the experiment by filling a clear plastic bottle about 1/3 full with water. Add the same amount of cooking oil. Seal the cap tightly on the bottle and have the children shake it to mix the oil and water. What happens? Do they mix? Which substance settles to the bottom? Ask the children what they think will happen if you add food coloring. Will it mix with the water? Why or why not? Will it mix with the oil? Why or why not? Add the food coloring, seal the bottle again, and shake it. Then let it settle. What happens? Whose predictions were correct?

Remind the children that making predictions during science experiments isn’t about being wrong or right—isn’t about learning and discovering!